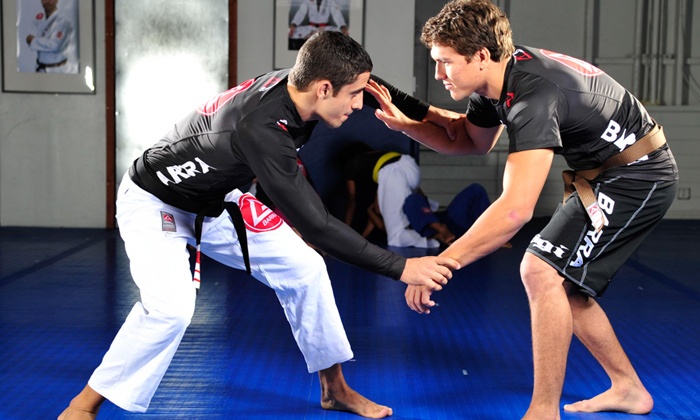 Learn all about BJJ with our list of all the jiu-jitsu terminology you need to live jiu-jitsu!

Getting started at our Ashburn martial arts gym has never been easier! Our Brazilian Jiu-Jitsu school in Ashburn welcomes students of all skill levels! We are proud to provide resources for anyone who wants to learn more about Brazilian Jiu-Jitsu or live Jiu-Jitsu. Below is a list of the top 12 BJJ terms covering everything from techniques and positions to movements used in our BJJ classes. A quick peek before class can give you better results from the start!

This move is most often done to “buck off” an opponent in the mount position. To perform a bridge, lay on your back with your feet planted on the mat as close to your butt as possible. From there, push off the mat with your legs to elevate your hips and spine. When this move is done correctly, only the toes and tops of the shoulder should be left touching the mat.

Your Gi is your Brazilian Jiu-Jitsu uniform. No-Gi days simply mean that you may wear a rash guard and athletic shorts or pants instead of your uniform.

This is a position where you can either attack or defend. “Playing guard” refers to any position where you attempt to control your opponent using your ankles, knees, or hips so they do not advance. This is typically paired with a grip to hold them in place.

Hooks refer to the top player’s legs when they are in back control. If your instructor shouts, “hooks!” during a roll, you should wrap your legs around your opponent’s torso and push out their thighs with the top part of your foot. This move controls the rotation of the bottom player’s hips as they try to escape.

Mounting an opponent involves sitting on their torso with your knees (or one foot and one knee) on the ground facing the opponent’s head.

This refers to the act of sparring, or grappling, with another Brazilian Jiu-Jitsu student. This Jiu-Jitsu term was coined because of the rolling motion created by experienced BJJ students as they move on the mat.

Shrimping allows a player to quickly move their hips away from an opponent. To successfully complete this move, you must first lay on your side on the mat. In one swift motion, lift your hips off the mat using your foot and shoulder. You can then scoot your hips backward by straightening your legs. This creates space between you and your opponent and could be used to affect your opponent’s balance.

The goal of each Brazilian Jiu-Jitsu match is to get your opponent to submit. This is achieved when one opponent forces another to tap out.

A sweep is an attack that puts someone in a weak position into a more dominant position. This move allows a person to roll their opponent into a more neutral position.

Refers to the act of submitting to an opponent. Tapping out can be done by tapping the mat three times, tapping your opponent three times, or by yelling, “tap!” Tapping out with your foot or hand are both acceptable. Be sure you tap out in a way that is noticeable by your opponent – and stop immediately if an opponent taps out in response to your attack. In training, tapping out simply means you can begin a new roll. In competition, tapping out would end the match.

This is a defensive position that involves tucking in your arms, legs, and head to resemble a turtle hiding in its shell.

Our Brazilian Jiu-Jitsu and Fitness classes in Ashburn require a strong understanding of the BJJ Terminology your instructor will use in class. Understanding the terminology your instructor will use in class will be extremely beneficial. Whether you are taking a BarraFIT class or are working on earning your Brazilian Jiu-Jitsu belts, no other martial arts gym in Ashburn provides you with a whole-body workout like Gracie Barra. Don’t wait to begin, claim a free BJJ class right here in Ashburn to get started!