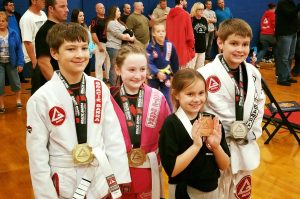 If you have children, you’ve seen it. Kids fall down, and run into things a lot. They don’t have the body awareness and coordination adults have. You’ll find that children who get less screen time and more time outside have better coordination. They’re jumping off things, hanging upside down, and chasing after insects (or other kids for that matter). They are learning how their bodies work by exploring, and they don’t even know they’re doing it.

Jiu Jitsu works in the same manner, but better. In Jiu Jitsu, children learn about leverage and technique, and how to use their body to create it. Numerous repetitions cement muscle memory in children’s bodies and minds. They start to develop an understanding of what their limbs are doing while they are focusing on something else, such as their posture. It develops coordination very quickly. Using technique against someone who is actively trying to resist them, forces a child to know what their body is doing, while simultaneously trying to control someone actively resisting them.

I feel like I could write a book about this subject, and someday maybe I will. It is so very important that children understand how to defend themselves. We all know too well about the bullying problem in our school systems. I don’t see it as a school system problem, but a societal problem. Kids are going to bully and kids are going to get bullied; this is nothing new. However, with the constant, immediate connection we have to our neighbors via the Internet, cellphones, school, and after school activities, it becomes very easy to bully a kid and not give that child a chance to escape it. That kind of pressure is absolutely overwhelming.

Self-defense, and obtaining the knowledge to defend oneself is easy once you understand it. However, like anything else, it is perishable. You have to be consistently immersed and constantly creating that muscle memory which I talked about earlier. When a child finds out how easily they can dominate and control someone trying to attack them, it almost seems comical. They don’t have to worry about a big kid just because they are big. They don’t have to worry about a kid threatening to punch them or kick them. Jiu Jitsu is a combat martial art where you can train, and train safely while still creating a ‘real world environment.’ What reason would the child have to fight or even worry about fighting when they already train in it every day? 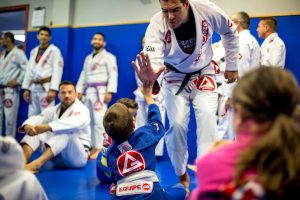 There’s a common saying in Jiu Jitsu “the mats don’t lie.” This basically means that whatever kind of person you are, the mats will bring it out of you. Why does this happen? In Jiu Jitsu we get put in tough positions. Imagine, you’re on the ground and you have someone on top of you twice your size, and they are doing everything in their power to control you. It feels like you’re drowning. You’re going to struggle. You will panic. You’re going to feel helpless, and you’re going to emotionally react to that. Do you stop your partner or do you continue fighting? If the child continues to train in Jiu Jitsu they eventually get comfortable being uncomfortable. They learn that if they avoid certain mistakes they won’t get put into these situations. This is such a great example of life and how we learn from our mistakes, even as adults. In Jiu Jitsu, we just tap and start over. You win or you learn. We teach children that it’s ok to cry,  it’s ok to get scared, and it’s ok to get upset, but you have to learn from it and keep going.

Wrestling, grappling, Jiu Jitsu; you can do a quick Google search and find out how many calories are burned in just a one-hour period. Why are so many calories burned? We are training with someone who is actively resisting us. When our partner realizes that we are taking a break, they ramp it up and we have to engage those muscles that we were just trying to rest. The same could be said in reverse when we realize our partner is getting tired. It creates a constant struggle and requires constant movement. Our warm ups alone get the heart racing and prepare the children to start learning technique. Our warmups have body movement exercises that we use to help their Jiu Jitsu grow, along with their cardio levels. There isn’t a better work out, oh, and it’s fun!

5. Friends who are on your Team

Socializing isn’t just important for adults, it’s needed for kids too. We have had shy children who come in and it takes a few classes for them to even get out of their parent’s laps. We require our students to talk to the new children who are trying class. They tell the prospective students their name and shake their hand. We even ask the adults to do so with the other adults. We want the kids trying class to immediately know that they are welcomed; and the students are excited to get to know them. Once that kid tries their free class and joins the team, they are instantly part of a brotherhood. They still argue and have disagreements, but they understand how important their teammates are to the school and to making their own Jiu Jitsu better.

Here’s a direct link to our schedule https://graciebarra.com/jefferson-city-mo/our-school/#schedule 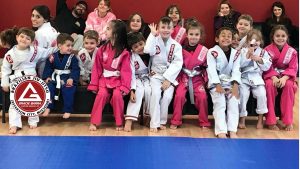 Yelling at a child is not going to help them. Making a young child do everything right is not going to help them grow as a person. Children need to have boundaries but the punishment should fit the crime. Expecting an instructor to change your child’s behavior, when they only have one hour of the child’s attention a day, in a one-month period is asking a lot. Instead, understand that discipline has a few different meanings and martial arts aren’t a way to make your child behave.

Below is a great link to watch about why kids should train at Gracie Barra.

Our goals with children are long term, just like their Jiu Jitsu training needs to be. You won’t find any 10-year-old black belts in Jiu Jitsu because they aren’t even allowed to get a blue belt (second belt in the adult curriculum) until they’re 16 years old. A Jiu Jitsu black belt usually takes about 10 years to earn for an adult. Long term goals are better for kids, because it doesn’t put as much pressure on them to always do or say the right things, and they can just be kids.

Lastly, your child will know and understand what real self-defense looks like. They will take our “no bullying” class, they will learn techniques for dealing with strikes, and they will understand how to take down an attacker and control them. But the best thing they will take away from training with us is a confidence in themselves-that if they were messed with or bullied-they know that they don’t have to fight unless they are attacked. If they are attacked, they won’t even have to think about what to do: they will just react. They train in combat everyday so it will not be overwhelming or foreign to them.

Preparing a child mentally as well as physically for any situation is what Jiu Jitsu offers. There are no choreographed steps, no striking boards and bags every day. Someone will always move or react different than they did the day before. That is how you teach a child self-defense.