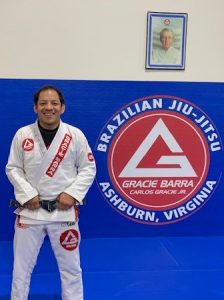 What BJJ means for me: When you think of jiu-jitsu you may think of submissions you see on the UFC, but for me jiu-jitsu is so much more than what happens on the mats. I look at my life through the lenses of jiu-jitsu and Gracie Barra. In life, as in jiu-jitsu, you can do all the right things yet still get caught in a submission. How you react to being caught is what will determine the ultimate outcome!

Background: I was born in state of Ceara, Brazil. I lived in a small beach city called Iguape, near Fortaleza. When I was 7 years old I moved with my family to Southern California. One of the most significance events in my life was 9/11. That day I knew that I needed to do something to help the country that gave so much for my family and I. I joined the world’s finest, the United States Navy, and served from 2002 until 2006. I served as a Damage Controlman (shipboard fire fighter) on the USS John C. Stennis. I have so much respect for those that serve this great nation; it is because of their selflessness that we can be free.

Come join us at Gracie Barra Ashburn as we continue to change people’s lives through Gracie Barra jiu-jitsu. #jiujitsuforeveryone