Professor Reggie, married with 3 kids,  was born on the 5th of November, 1971 in Fortaleza, Ceará, Brazil. He started training Karate at age 10, influenced by the famous Kung Fu movies of the 70’s and 80’s, but his martial arts training at the time was short lived. Because he was a very tall kid, he started being motivated by friends and family to train Basketball, which he did. He became a very successful basketball player winning successive scholarships through high school/college and university. 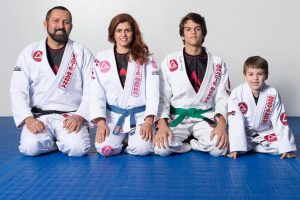 To improve his performance in basketball, Professor Reggie did weight lifting, reaching 120kg/264lbs with 6% bodyfat. After university, he also played basketball in Brazil’s professional league. Around 1999/2000 he stopped his basketball career and was just into weight lifting to keep fit. At his local gym he met several fellow weight lifters who also practiced Jiu Jitsu, these friends used to invite him to come to the BJJ academy and learn some grappling. One day, after many invitations, Professor Reggie decided to take their offer. His first class was in Fortaleza, at the time the coach paired Reginaldo up with a yellow belt in the sparring session, Almeida felt underestimated but it was himself who was underestimating the yellow belt, the outcome of that roll was he being tapped  5 times in a 5 minutes. This beating motivated Professor Reggie to come back.

Professor Reggie got his black belt in 2008 and moved to the United States.