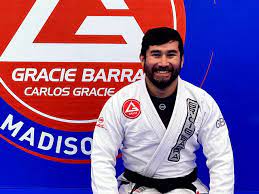 Evandro Campelo Jr. is from Manaus, Brazil, and started training at the age of eight. Campelo received his black belt from Master Royler Gracie and his second degree from Professor Cristiano Ribeiro Da Costa. Evandro started Jiu-Jitsu with the Gracie family at a very young age and competed at the highest levels for Team Humaita under Royler Gracie. Campelo is a two-time Brazilian National silver medalist (blue belt) and multiple-time Manaus State Champion (purple, brown, and black). He reached the quarter-final round at Worlds multiple times as a black belt and has fought the toughest guys in his division such as the legend Cobrinha. Prior to joining our team, Campelo worked as a physical therapist. Campelo is eager to fight again, now at the Masters’s level, and to share his decades of experience in Jiu-Jitsu with the communities in Dane County.