Michelle’s interest in martial arts began when she wanted to learn a  practical and efficient form of self-defense. She immediately fell in love with combative training and eventually started teaching Krav Maga classes her last two years at Academy. After years of training the self-defense system, she wanted to learn the art of ground fighting in order to become a more well-rounded fighter. When she first tried jiu-jitsu at Gracie Barra Doral, she instantly fell in love and was surprised of how effective ground fighting was, even for a petite woman like herself. She hasn’t looked back since and trains jiu-jitsu on a regular basis, as she believes there’s nothing that compares to it.

She enjoys competing in jiu-jitsu tournaments and most notably won Gold at No Gi Worlds Championship 2017, making her a World Champion in just 2 years of training BJJ. For her, the benefits of training are life-changing and have proven to build confidence, self-awareness and self-love. Michelle’s goal is to inspire women of all ages to learn how to defend themselves while getting a good workout and having fun at the same time. The relationship bonds she’s built with her fellow trainings partners, Professors and coaches are also life-changing and very special to her.  Her long term goal in jiu-jitsu is to continue to train, compete and become a Gracie Barra black belt one day. 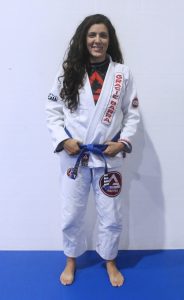