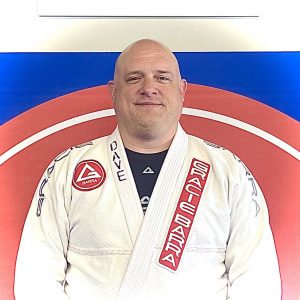 David Landmeier grew up in the northwest suburbs of Chicago and currently resides in Highland Park.  He earned a BS in Analytical Geography from Eastern Illinois University and worked in International Freight Logistics before eventually becoming a Brazilian Jiu Jitsu instructor.   He first learned about Jiu Jitsu the same way many did, by watching the first UFC.  Ever since, he has had a desire to try Jiu Jitsu but never had the time due to the long hours and high demand of his career.  David was out of shape and looking for an activity that would keep his interest, Brazilian Jiu Jitsu fit the bill.  David has been a member of Gracie Barra Deerfield since 2015 where he began his Jiu Jitsu journey at the age of 42.  He has had the pleasure of having Professor Marcelo Souza guide him throughout his journey.